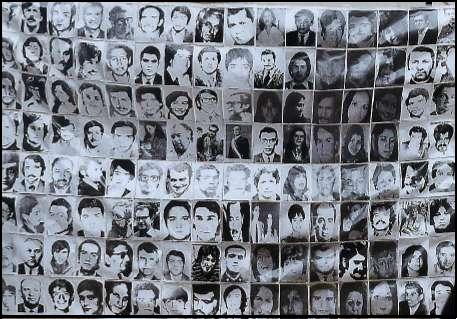 Today, on the International Day of Enforced Disappearances, the Mauricio Aquino Foundation is proud to announce a historic victory for the Our Parents’ Bones campaign!

El Salvador’s president signs executive order for the creation of a commission to search for our disappeared parents and relatives.

In response to the demand put forward by the Our Parents’ Bones campaign, on Wednesday, August 23rd, the President of El Salvador, Salvador Sánchez Cerén, signed an executive order creating the National Commission for the Search of Adults Disappeared in the Context of the Armed Conflict (CONABUSQUEDA). This is a huge milestone for the Our Parents’ Bones campaign and is the culmination of years of hard work led by the Mauricio Aquino Foundation and in collaboration with a network of human rights organizations in El Salvador and the U.S.

In 2014 the Mauricio Aquino Foundation launched Our Parents’ Bones campaign. Our goal is to uncover the truth of what happened to the forcibly disappeared during the Salvadoran Civil War (1979-1992) and to ultimately reunite their remains with their families for sacred burial and reconciliation. The primary goal of the Our Parents’ Bones campaign over the past three years has been the creation of this National Commission and our activities have specifically targeted the U.S. Congress and the Salvadoran government with this goal in mind. Most recently, in January of this year, Our Parents’ Bones sent a delegation to El Salvador accompanied by U.S. Congressman Jim McGovern (D-MA). Thanks to the leadership of the Mauricio Aquino Foundation and the support of Congressman McGovern, we were able to secure meetings with President Sánchez Cerén and his cabinet. Soon after a series of meetings we held with the President, the Minister of Foreign Affairs and the Secretary of Governability and Public Security, it was announced that the Commission would be approved by the President. A working group, in which leaders of our campaign participated, developed a document that was approved by the President as an executive order on August 23rd.  President Sánchez Cerén will hold a public ceremony in the near future to announce the Commission.

We are elated and humbled by this victory. In months to come we will be working to release information on the Commission and how relatives of the forcibly disappeared can request the search for the remains of their loved ones. Now more than ever we need your voices, your involvement, your stories, and your continued perseverance. Although this Commission gives us a new sense of hope, there is much work to be done and we must continue to support one another.

We thank all of you who have partnered with us and acted in solidarity with our campaign. In particular, we would like to thank a key network of human rights organizations in El Salvador including: CODEFAM, COMADRES, COMFAC, other members of Promemoria Histórica, Asociación Pro-Busqueda, FESPAD, and UCA El Salvador, who have supported our efforts. These Salvadoran organizations were essential in the push for this Commission. Our Parents’ Bones would also like to thank our allies in the United States including: the Due Process of Law Foundation (DPLF), UW Center for Human Rights, SHARE El Salvador/Fundación SHARE, and Washington Office on Latin America (WOLA).

Next Steps: A Delegation to El Salvador For a Historic Ceremony and Building the Commission

Our Parents’ Bones is rapidly organizing a delegation to travel to El Salvador in the next few weeks for the ceremony inaugurating the Commission. We will be providing travel scholarships to a number of the sons and daughters of the Disappeared, our Desaparecidos, who are currently living in the United States. Please support us in this effort to bring these sons and daughters to this historic ceremony by donating here. For these sons, daughters, and other relatives of the Disappeared, this will be the first time the government of El Salvador makes some type of recognition of the fact their loved one was forcibly taken from them, and pledges its support for the investigation of these cases. If you are a son or daughter and lost a loved one to forced disappearance during the Salvadoran civil war or know of someone in this situation and you are interested in joining our delegation, please contact us at: info@mauricioaquinofoundation.org.

As you can imagine, this is just the beginning of a long process to honor our Desaparecidos. However, we are motivated to keep up our hard work during the execution phase of this commission–many more challenges to overcome and we are ready!  Please follow the next steps of the Our Parents’ Bones campaign on Facebook at Our Parents’ Bones, Twitter (@ourparentsbones), Instagram (@ourparentsbones), LinkedIn, and via e-mail. Here we will be posting updates, future meetings, and our next steps as an organization.